My Grandmother told me that my uncle used to get new presents and much to her dismay he would take them apart.  He was more interested in how they were made than actually playing with them.

Michael is the same way except he has not grown out of it.  I am very fond of getting new appliances and I want them to stay new and pretty looking as long as possible.

When we bought our new vacuum cleaner a couple of years ago we had hardly carried it into the  house when Michael asked if he could open it up and have a look at how it works.

I just looked at him and said, "NO FUCKING WAY."

Boy was he happy when it broke a few months later.  (I wonder if sabotage was involved).

There is a plus side to living with Evil Takeraparter.   He fixes everything immediately when I ask him to.  I am however starting to wonder if the things really broke in the first place. Although most things get fixed there are times when the taking apart results in disaster.  Jess laptop cable stopped working, in fixing it he accidentally disconnected the fan, then when he fixed that he accidentally damaged the monitor so now she has to use an external monitor, but it is working if he had not fixed it,she would have no computer at all.

I received a beautiful new fan from Dane for my birthday last year.

I nearly had heart failure when I found, my beautiful fan was in pieces!

"WHAT ARE YOU DOING TO MY NEW FAN?"

"I am checking the wiring, I am convinced the burning rubber smell we have been smelling is coming from the fan."

"I promise when I am done, I will put it together very neatly and you won't be able to tell that I took it apart."

Fortunately my fan is back together undamaged.

When something in the house that we rent is broken, I suggest that we phone the rental agent as it is their problem, Mr Takeraparter complains that I am taking his fun away.

"I have an idea, I am going to build a rotisserie motor for the chicken with my Meccano set."

Just hope Mr Takeraparter is not going to hook up with Brain. 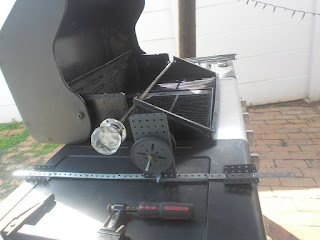 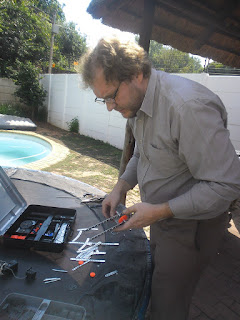