I am not a lizard person

I have an extremely short tongue.  Michael and my daughters on the other hand all have very long tongues, they can catch flies with those things.

I worry that they may all be lizard people, fortunately I am not.

Besides for not being able to whistle or roll my r's having a short tongue is not a problem, after all I don't catch flies for dinner.

My family's favourite party favour is to get me to stick out my tongue.  Why this never fails to cause much amusement is beyond me.  People should be more worried about why their tongues are so long.  Have you ever watched V? 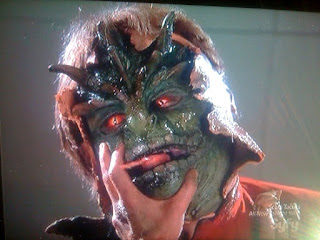 I once went to a party where they were handing out jelly shooters in little shot glasses.  I really battled with these.  I eventually had to resort to using my finger to get the jelly out. 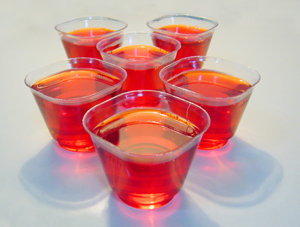 Me speaking to Michael:

"These jelly things are really hard to get out of the glass."

"No they are not"

Then he picked up one and I watched him curl that long tongue of his in the shot glass.

Then I understood or as Oprah says, I had an "Ah hah moment".

Our Chihuahua puppy Col has an exceptionally long tongue.

When he jumps on us he tries to clean our ears and any other crevice he can get to with his tongue.

Michael has flu and his sinuses are very blocked up, we were speculating whether Col would be able to clean his sinuses out with his tongue.  Michael decided that no matter how much his head hurts, he does not want to find out.