Asian Ya Ya sisters and other holiday stuff

Ever had a holiday where you actually felt a bit like a spoiled brat because although it should have been good you were not quite enjoying it?

We stayed in a perfectly good B and B except that the parking was non-existent so we had to hope that when we drove anywhere we would find a parking when we came back.  The rooms shared a geyser so when there were additional guests we had no hot water.  Not one of the hosts seemed to have any skill when it came to making eggs.

Michael and I spent the last 10 days in Cape Town.  Michael went for work and I lucky fish went along for a holiday.

When I packed I pictured sunny weather as Johannesburg was hot and sunny and although spring it felt like summer.

Instead this is what we encountered in Cape Town: 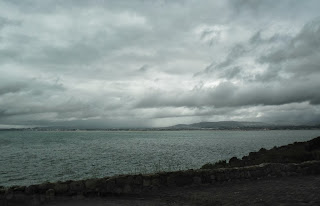 I packed sun hats, sandals and t-shirts all great for a summer holiday.  I forgot all Michael's belts so he had to use the guest house's dressing gown belt to keep his jeans on.

We were booked into a guest house co-incidentally a block away from where Carmen used to live in Green Point.  Carmen is longing to get back to Cape Town so she was rather green with jealousy.

As we were in a Bed and Breakfast I called Carmen often to find out where to find the best restaurants for lunch and supper.

I called her and asked her where Michael could get a good hamburger.

My cellphone's volume is terrible and the wind was blowing like crazy.

So we were walking along the street looking for the suggested restaurant was and saw "Hassar".

I said to Michael that this must be the place.

We told the waitress that our daughter recommended the restaurant for it's burgers.  The waitress did look puzzled.

The waitress brought us the menu and there was one hamburger on the menu that did not look particularly exciting but Michael ordered it.  It was alright but not anything spectacular.

The next day we both walked further along the same street and saw "Hudsons", they only make hamburgers.  We were very amused.  The burgers were fantastic and I could  have one because they have wheat free burger buns as well.

We ate a lot of sushi as there was a very reasonable sushi place close to the guest house as well.  The sushi place was driven into by a drunk driver.

The highlight of our holiday was a boat trip to seal island.  The ocean was very rough and it made it very exciting like being on a roller coaster. 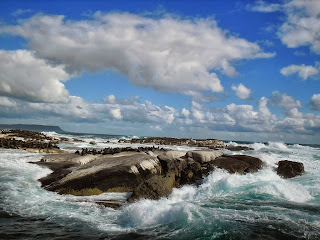 On this trip we met Asian Ya Ya sisters, unfortunately I did not get a pic of all three Ya Ya sisters together. 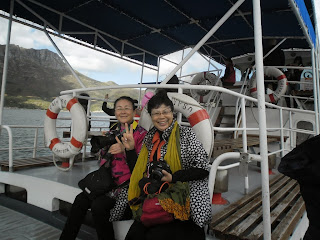 They did not speak any English but we communicated perfectly with hand gestures.  After the trip we knew exactly what the one lady was telling her husband waiting at the harbour.  Her hands were going up and down showing how wild the waves were.